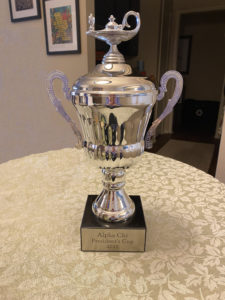 Alpha Chi’s most prestigious chapter award is the President’s Cup, given at every national convention since 1987 to the chapter judged most outstanding. The beautiful President’s Cup trophy and an honorarium of $200 are presented to the recipient at the annual convention. Chapters cannot win the award in successive years.

Each regionally-nominated chapter should present an application specifically addressing each of the criteria below, in sequence, devoting a separate section of the application to each criterion, with each section arranged chronologically with the most recent year first. The Awards & Honors Committee will consider only this specifically detailed information.

President’s Cup selection criteria, in order of importance, are as follows:

Although the committee will not evaluate supplementary material such as photographs, news clippings, brochures, scrapbooks, etc., nominated chapters are welcome to bring such material, separated from their applications, for display at the convention.

At the annual conventions, chapters let their regional presidents know their interest in applying for the award to be given at the next convention. This can best be accomplished at the region’s business meeting.

Each competition covers chapter activity for two full years, beginning with the prior year’s convention, up to and including the convention at which the award will be made. Thus, nominated chapters will submit activities for a period that includes three conventions.

No later than one week before the national convention, each nominated chapter sends a document detailing how it met the Outstanding Chapter criteria to office@alphachihonor.org. It will then be electronically forwarded to the chair of the Awards & Honors Committee. The following information should head the document: Name of Institution, Chapter Name (State & Greek letter), Region, and Chapter Number.